Notes: Margaret, from a Welsh-speaking family, was brought up in Pwllheli from the age of 9 by her aunt and uncle. She probably trained as a nurse in London, perhaps at St Bartholemew’s Hospital which became the 1st London General Hospital. During the war she served as a Staff Nurse there until her death from flu at the age of 28; she was described as ‘cheerful and willing’. The War Office paid her funeral expenses of £20 2s 0d. Her gravestone in Pwllheli cemetery is set with the commemorative plaque (dead man’s penny’) sent to her relations after the war. Her name also appears on the Nurses’ Memorial in St Asaph’s cathedral. Thanks to Wayne Bywater. 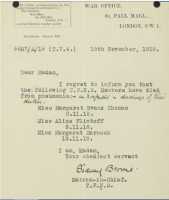 Letter from Miss Sidney Brown to Agnes Conway of the Womens Section of the Imperial War Museum listing Margaret’s name as having died of pneumonia. 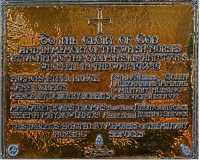 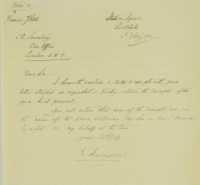 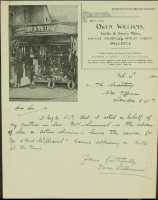 Notes: Before the War Nurse Parry worked at Heswall Hospital, Wirral. After a spell working in the First Western General Hospital (Fazackerly Hospital), Liverpool, she served on HMHS Mauretania, sailing to and from Egypt several times. On arrival in Egypt the second time, she wrote home “I can't say that I am in any way struck with Egyptian life, and the food, oh dear! I suppose you get used to it. ... ‘. She later served in France and was awarded the Royal Red Cross in January 1919.

Notes: Annie Breeze probably trained in London, as her name appears at number 1 on the Roll of Honour at the Welsh Chapel, King’s Cross. She worked in hospitals in Aldershot before leaving for France in 1916. She was awarded the Royal Red Cross that year. 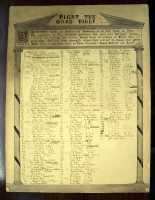 Roll of Honour of those who served in WWI, Kings Cross Welsh Chapel London

Annie Breeze’s name on Roll of Honour of those who served in WWI, Kings Cross Welsh Chapel London

Notes: Hannah, a trained nurse, seems to have been a victim of Spanish Flu. She was 23 when she died, and is buried at Bridgend Cemetery.

Hannah’s photograph was collected by the Women’s Subcommittee of the Imperial War Museum as part of its collection of women who died during the War.

Letter to the Secretary of the Women’s Committee from Hannah’s brother, Lieut David Mark, November 16th 1918

Notes: Gwenllian Morris was district nurse in Holywell, then Aberystwyth. She was posted to a military hospital in St Malo with the French Red Cross in October 1914. She contracted diphtheria while there, but recovered and volunteered to join the Serbian Relief Fund Hospital in 1915. Her unit worked in Malta and the Dardanelles before arriving in Serbia. They were captured in the winter of 1915/16 by the Austrian/Bulgarian army , but continued to work mainly with typhus patients. It is not known when she came back to Britain, but she received her war medals in 1921 (on the card, she is described as being a Sister with the 2nd British Farmers Unit – a mystery.*)
*The mystery about the British Farmers Unit has been solved by Nigel Callaghan, to whom many thanks. ‘I've sort-of explained the comment about Gwenllian Morris's record referring to her as British Farmers Unit. It really existed. There were at least two, and were funded by money raised by farmers (British Farmers Red Cross Fund), and were in Serbia in 1915.’ 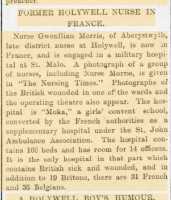 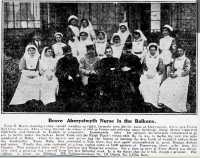 Notes: Born in Bradford and trained in London, Lilly Huntley had worked as an Inspector for the Medical Officer of rnHealth’s Department in Cardiff. She joined the Red Cross on 1st September 1914 and was posted to Neath, forst as a staff nurse and then as a sister. She was awarded the Royal Red Cross. After the War she became Head of Midwifery Services in Cardiff. Her name appears on the Roll of Honour in Cardiff’s City Hall.rn 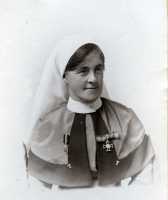 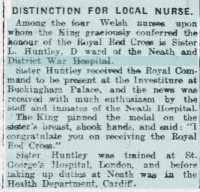 Report of the presentation of the Royal Red Cros to Sister Lilly Huntley, Herald of Wales and Monmouthshire Recorder 14th October 1916.rnrn

Notes: Katherine Conway-Jones, born around 1880, trained at the Leicester Infirmary; this was renamed the 5th Northern General Hospital in 1914 (and subsequently changed back). In 1915 she volunteered for foreign service, initially serving in France and subsequently on hospital ships serving the Dardanelles, Egypt, India, Mesopotamia and German East Africa. She was appointed Matron of HMHS Oxfordshire in April 1916. In the summer of 1917, declared ‘unfit for further service in the tropics, but fit for service in Egypt’, she returned to the UK on the New Zealand hospital ship Maheno, where she also served as Matron. She spent the rest of her time back in Leicester.She was mentioned in despatches three times, and was awarded the Royal Red Cross second class in 1916 for her work in the Dardanelles, and first class in 1917 for bravery during the mining of SS Tyndareus off South Africa. Her medals were sold for £2800 in 2015.rnAfter leaving the TFNS in 1919 she emigrated to Canada to set up a small-holding on Lulu Island, Vancouver, with Julia Hamilton, a Canadian nurse whom she had met in Salonika.A large file of Katherine’s official papers survives in the National Archives.

Katherine was Matron on this ship, travelling through Suez to India and back to S and E Africa. 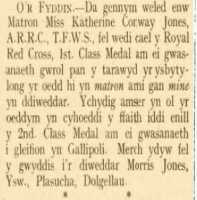 Letter from K C-J attempting to claim retrospectively the Mesopotamian Allowance to which nurses working east of Suez were entitled. She was refused, though tried again in 1947.

Letter from K C-J attempting to claim retrospectively the Mesopotamian Allowance to which nurses working east of Suez were entitled. She was refused, though tried again in 1947. (reverse)

Place of birth: not known

Notes: Elizabeth Montgomery Wilson was a veteran of the Boer War, in which she served as a superintendent in Princess Christian’s Army Nursing Service. She was already Matron of Cardiff Infirmary, and became Principal Matron when it became the 3rd Western General Hospital in 1914. She reverted to the post of matron at the end of the War. 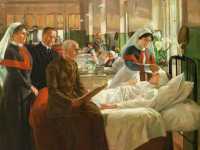 Elizabeth Montgomery Wilson in Margaret Lindsay Williams’s painting of the 3rd Western General Hospital. She is on the left.

Award of a bar to the Royal Red Cross announced in the London Gazette. Elizabeth Montgomery Wilson had already been awarded this decoration earlier in the War. London Gazette13th January 1920

Notes: Annie, both of whose parents worked for the Carmarthen Poor Law Union, became a pupil teacher at 13. She later trained as a nurse at the Bristol Royal Infirmary, and joined the TFNS. At the outbreak of war, Bristol RI became a military hospital. Annie was posted to Egypt in October 1915, and was then transferred to HMHS Braemar Castle in April 1916, where she remained until it was struck by a mine in the Aegean Sea on 23rd November. No lives were lost, but she spent some time in the sea. She spent the rest of the war in France, where she rose to the rank of Sister. She was discharged from the TFNS, with glowing references, in 1919, and returned to Bristol Royal Infirmary – they would be ‘very pleased to have her back again’. She gave up nursing and the TFNS when she married Bert Kyght in 1923.

Report of Sarah’s career, published when she was home on leave. Carmarthen Journal 29th November 1918. 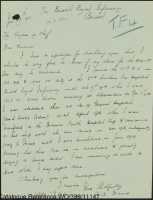 Notes: Gwenllian Lewis seems to have been working as a private nurse in the Midlands before she was called up in 1914. She spent three years at the 5th Northern General Hospital in Leicester before going to France in 1917. She remained there until early 1919 when she returned to Leicester. Her annual appraisals all refer to her as a ‘good nurse’ who was kind to patients. Her only misdemeanour was losing her TFNS badge, and having to pay for a replacement.

Gwenllian Lewis’s last annual report before being deployed to France. 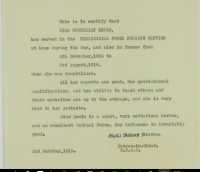 TFNS testimonial for Gwenllian Lewis on resigning from the force.

Notes: Hannah Davies was a probationer nurse at Milton Infirmary, Portsmouth when she was called up for Home Service at the 3rd Western General Hospital, Cardiff, where she was promoted to Staff Nurse. She seems to have contacted Influenza during February 1919, when she is described as being ‘pale’ and anaemic. It may be for this reason that she was discharged on March 1919. She continued to be attached to the renamed Territorial Army Nursing Service until she retired from this in 1936.

Members of the forces were encouraged to fill in a disability statement on demobilisation so that they could use it as evidence in a future insurance claim.

Notes: Born in Carmarthenshire in the 1870s, Zillah trained at St Bartholomew’s hospital in London. She seems to have worked as a private nurse for many years, a job that included accompanying patients to Egypt and the West Indies, she was called up in 1914 to serve on the hospital ship Carisbrooke Castle. Some of the Welsh soldiers she cared for were delighted to find someone in authority who could speak Welsh. Whilst there she was promoted from Staff Nurse to Sister. According to her memoir, she had hoped to join the RN Nursing Service, having forgotten that she had already signed up to the TFNS. In October 1915 she was posted to the 4th Northern General Hospital, Lincoln, despite hoping for another Hospital Ship appointment. She records that her replacement on Carisbrooke Castle suffered from appalling sea-sickness. Whilst at Lincoln (where she remained for the rest of the War) she had a bicycle accident and broke her ankle badly; there is much correspondence about this on her War Office file. After demobilisation she went back to private nursing. Her memoir was published in 1964. 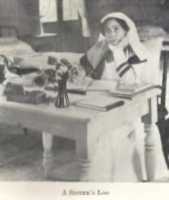 Sister Zillah Jones, frontispiece to her memoir ‘A Sister’s Log’ 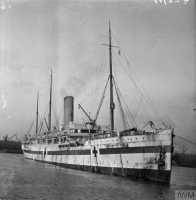 Report of Zillah Jones’s experiences on board ship.

Report of Zillah Jones’s experience on board ship [continued].

One of the proceedings of the medical board when Zillah Jones broke her ankle.

Notes: Margaret Lewis trained in Cumberland, and was a Queen’s [district] Nurse before joining the staff at the 4th Southern General Hospital in Plymouth in November 1916. Margaret was posted to France in 1917, and served in several hospitals and casualty clearing stations. She was offered the chance to serve ‘in the East’ instead of being demobilised in 1919, but declined. She remained in the renamed TANS for several years, bring promoted from Staff Nurse to Sister in 1922 when she is described as ‘good tempered and tactful’. She resigned on marriage in 1928.

Record of Margaret Lewis’s detail on discharge from TFNS 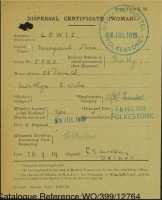 Part of letter from Margaret Lewis to the War Office listing her postings.

Notes: The daughter of a well-known Mountain Ash choral conductor, Hugh Ellis, Lily trained at Swansea General and Eye Hospital. After working in Swansea and Malvern she was appointed to be theatre sister at Lewisham Hospital London. At the outbreak of War she joined the TFNS and was serving at the 1st Southern General Hospital when King George V visited it in 1916; she was awarded the Royal Red Cross. 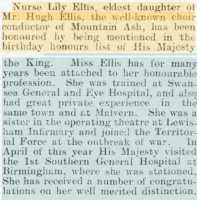