Notes: Daphne Powell served with the WAAC/QMAAC at Swanage, where she proved ‘a very efficient worker’. She was 21 years old when she died, possibly of Spanish flu.

Grave of Daphne Powell, St Gwendolines Church, Talgarth, Her grave is on the right; her brother Charles Baden Powell, who died in 1921, is on the left.

Grave register showing the entries for Daphne Powell and her brother Charles. Both graves were originally grassy mounds; the headstones were erected recently by the Commonwealth War Graves Commission.

Report of the funeral of Daphne Powell. Brecon County Times 1st May 1919

Notes: Jean, who was 18 when she died, was the eldest of six children of a widowed mother. In November 1919 her case was raised in Parliament by Haydn Jones, MP for Merioneth. Jean had been the chief support of the family, but her mother was not entitled to any form of compensation and was forced to ask for parochial relief. The matter was ‘considered’ by the Financial Secretary to the War Office, but we do not know the outcome. Jean Roberts’s name appears in the Welsh National Book of Remembrance.

Details of Jean Roberts in the War Graves Register

Jean Roberts’s name in the Welsh National Book of Remembrance.

Jean Roberts’s name on the War Memorial in St David’s Church, Blaenau Ffestiniog. It was obviously added after WW2, hence the mistake WAAF for QMAAC.rn. rn

Notes: Gwladys, an enthusiastic Girl Guide, was posted to Kinmel Camp, North Wales in February 1918. Her father and two brothers were serving in the army. 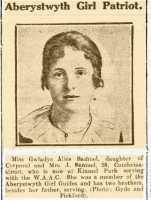 Notes: Edith C Kenyon, a doctor’s daughter, had part of her upbringing in Machynlleth. She was an extremely prolific writer of novels for adults and children, and occasional non-fiction. Towards the end of her life she wrote a number of Welsh inspired romances, with title such as Nansi’s Scapegoat, The Winning of Glenora, The Wooing of Myfanwy, and The Marriage of Mari. This was serialised with much publicity in the Cambria Daily Leader in 1916. Her use of the Ceredigion landscape was much admired. She also wrote at least one war themed book for children: Pickles – A Red Cross Heroine. Her work was popular in both the United States and Australia. 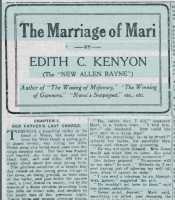 Full column promotion of the serialisation of The Marriage of Mari. Cambria Daily Leader 23rd October 1916. 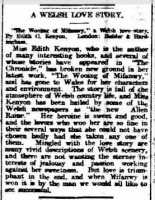 Review of The Wooing of Mifanwy [sic] in an Australian paper. The Advertiser Adelaide 22nd March 1913.

Notes: Lily was the daughter of Russian Jewish parents who had fled Russia to avoid conscription, and settled first in Swansea and then in Ystalyfera; she was the first of their children to be born in Wales. She began writing for Lais Llafur at 14, and was heavily involved in suffrage, ILP and pacifist activities. Her brothers were conscientious objectors. She was described by the Labour politician Fenner Brockway as “an active and belligerent pacifist… showing great resourcefulness and courage in defying the authorities and assisting draft dodgers, and those in prison”. She later took up the cause of the establishment of a Jewish state, and wrote several novels. 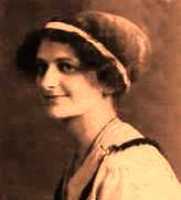